How I Got Into Weaving – Rosalie Neilson 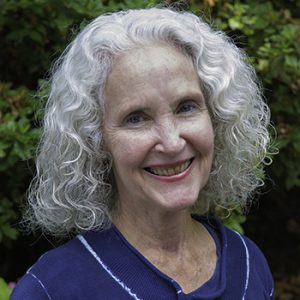 BACKSTORY: I first learnt about Rosalie through a friend who was taking a workshop class with Rosalie at Convergence. I saw the samples produced at this workshop in warp rep and was blown away by the colours, the designs, the possibilities of warp rep. Then I saw Rosalie’s own work and realised that here was someone who really knew her stuff on this topic. It was vibrant, exciting, energising with strong colour and geometric designs based on design blocks and she has created an excellent resource in a large collection of possible block designs in her publication “An Exaltation of Blocks.”. Roll on some years, and I took a workshop from Rosalie in the UK. I have that long sample piece still and one day intend to hang it on a long tall wall! Rosalie is also a kumihimo braider. As an active designer and teacher, she is regularly published in weaving and braiding journals and teaches throughout the United States, Canada, and England. Some of her publications are “The Thirty-Seven Interlacements of Hira Kara Gumi,” “The Twenty-Four Interlacements of Edo Yatsu Gumi,” and “Kongō Gumi: A Cacophony of Spots—Coils–Zags—Lines” . I also enjoyed her 2-hour video on rep weave by Interweave Press (which is now owned by Long Thread Media).

As a kid, I was interested in anything that had to do with yarn or string. If there was a tangled mess of string, I had the patience to undo it and wind it back into a proper ball. Cat’s cradle was one of my favorite activities to play with friends. I learned embroidery from my grandmother and crocheting from my mother. My mother also taught me how to sew on her Elna sewing machine in the third grade and I became proficient with all the special attachments: the “cams” used for fancy stitches, the buttonhole maker, and the metal contraption called a “ruffler”. I picked up knitting in the fourth grade. But my two favorite pastimes were spool knitting and weaving pot holders on the small metal loom. Although I entertained the idea of attending Parson’s School of Design to learn weaving, I didn’t have an opportunity to weave until I graduated from Goucher College. At a weaving demonstration, I met a member of the Baltimore Weavers Guild who was weaving a fabric in the “Summer and Winter” structure. I joined the Guild in 1968 and was able to rent a 4-shaft loom. At the time, I was living in the Peabody Conservatory of Music dormitory in charge of Student Services. The weaver who delivered the loom to the dorm gave me a quick lesson on winding a warp between the backs of two chairs. My first weaving project was an overshot coverlet pattern found in Mary Black’s New Key to Weaving. I followed the instructions explicitly having no idea how the pattern magically appeared. Enthralled, I wove a second version of the pattern in blue. The image on the right shows my first weavings on the 4-shaft rental loom. Whig Rose pattern. 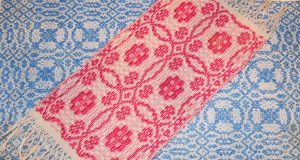 I bought my first loom, a 4-shaft counter-balanced Gallinger, from a rug weaver who had placed an ad in a complimentary newspaper that was delivered to the Peabody dorm. I finished my job with the Conservatory two weeks before my first son was born in 1969 to become a full-time mom and weaver. I tried most of the weaving techniques in the book by Mary Black and the rug weaving book by Peter Collingwood which my husband gave me. I furnished our apartments and house with all sorts of rugs … twined, corduroy, and weft-faced summer and winter. When we returned to Oregon in 1974, I had the opportunity of attending Convergence in San Francisco. Featured was an outdoor sprang piece made of rope that was attached to the “Pyramid” Building. As part of Convergence, Peter Collingwood taught a week-long sprang workshop where I studied with him at Mills College.

I wove Warp Rep for the first time in 1979 in a workshop taught by Malin Selander at the yarn store of Robin and Russ. Billed as a round-robin workshop, everyone chose a technique from her Swedish Swatch books. I chose warp-faced rep. While weaving, I began to notice that sometimes little floats appeared between the “ribs”. I wanted to emphasize these floats, and eventually after almost two weeks of weaving on my own loom, I figured out how to create a warp floating technique where some blocks weave plain weave, and others are free to float. From that day forward, I was hooked on Rep. I began teaching workshops, and eventually joined the Adjunct Faculty of the now-closed Oregon College of Arts and Crafts.

I traveled to Sweden on a roots trips with my mother where I discovered the same block designs in rep as those found in overshot. This started my exploration into block design. How many 2-block motifs? How many 3- and 4- block motifs? What about higher ordered motifs? This eventually lead to the publishing of my bock on symmetric block design called An Exaltation of Blocks. It contains a toolkit of printed Design Pages and Transparent Outlines, allowing a weaver to discover patterns never seen before. The computer program Fiberworks, developed by Ingrid Boesel and Bob Keates, was a valuable asset in writing the book. Having gained proficiency in the program over the years allowed me to create these pages and the illustrations in my book. I definitely learned about high-ordered patterns because every Design Page and Transparent Overlay is in reality a 33-block profile draft! The image to the right is Four-Block Motifs Rep Runner on an 8-shaft loom. A portion of the runner is the cover of my book An Exaltation of Blocks.