When crocodiles meet looms…. (it’s all in the teeth) 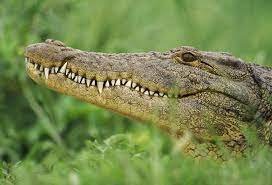 In the current edition of Complex Weavers Journal, I wrote an article about my Covid Chaos series (see last blog post). In it, I mentioned that my temples were not big enough to be of use in my project and my AVL (a very early one from the 1980s) does not have side horizontals which are at the right height, so I had no means of suspending crocodile clips with weights which is my preferred option of preventing excessive drawing in of the selvedges on other looms.

Sheila Carey, a fellow CW member, sent me a really useful hint. Here, with her kind permission to reproduce the information, is her solution.

I too weave on a 1980’s AVL, and I have been using crocodile clip temples exclusively for about 15 years, so I thought that I ‘d send you some pictures of what I do.  Of course, my loom has no warp on it at the minute and although I’ve taken hundreds of photos of the fell of my weaving showing clips attached, I only found one that showed where the cord with the weights went! 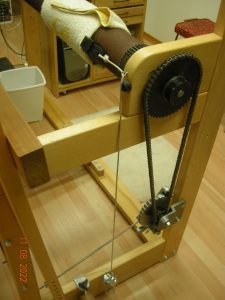 The simplest solution is an eyehook inserted in the wood that holds the sandpaper beam, just above the rubber bumper.  As there is no warp on I’ve hooked it to a towel I use to protect my arms from the sandpaper beam on narrow warps.   If there was a warp there it would be angled ahead slightly to the fell line.  I use large nuts for weights, as it’s easy to vary the number needed. 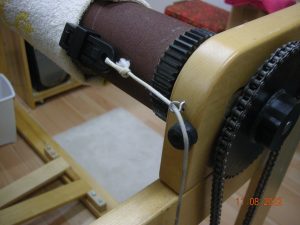 Next is a closer look at the eyehook.

As Sheila says: If you don’t like making holes in your loom, here is another option – which I actually used first.  My husband made me wooden “h” shaped pieces with a groove in the top to sit on the sides of the loom to hold the cords at the right height.  They can be moved to be straight in line with the fell as well, but I switched to the eyehook because I found that it was too easy to bump these and knock things askew. 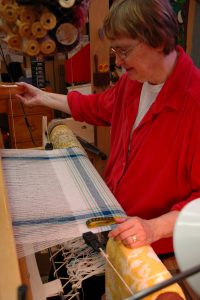 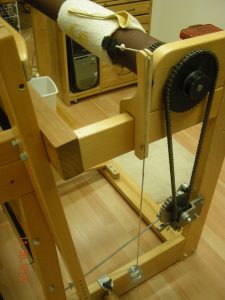 Sheila thinks that the image of her weaving may have been the first time she used the ‘h’ forms as she woven these particular towels in 2008, just after purchasing the loom. (I’m in awe of her memory!!)

It gave me one of those ‘doh’ moments – and ‘why didn’t I think of that??!!!’ How ingenious and so simple! I’ve done so many adaptations to my looms at various times and this will be another one which will be really useful. In addition, this could easily be adapted to other looms so you don’t have to be an elderly AVL loom user (that’s the loom (not the weaver) which is elderly, you understand! LOL) to adopt this handy hint.

Sheila has a feeling that she got this tip from someone else and that sparked an idea for an occasional series on my blog. What little hints and tips do you have that someone else might find useful?

If you are willing to share here, please do send them to me. I’ll make a blog post and share your ideas. That way, we can help each other in the lovely practical way that weavers do!

I really look forward to hearing and sharing some ingenious methods/shortcuts/hints and tips from our amazing weaving community!!