How I Got Into Weaving – Wendy Morris 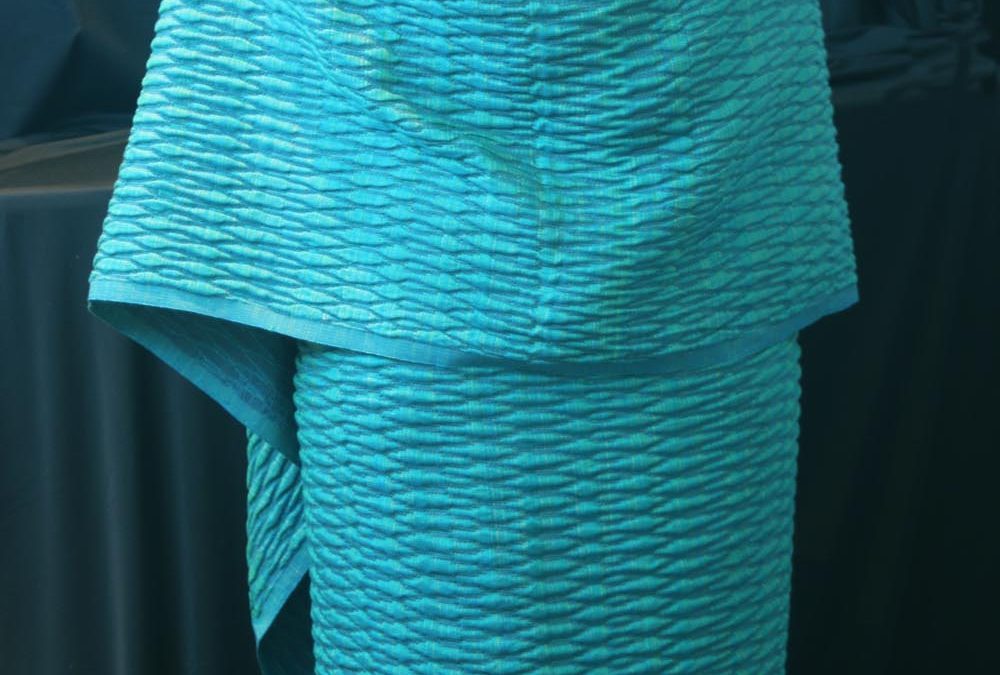 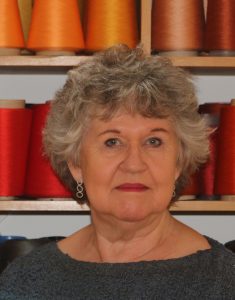 BACKSTORY: I can’t remember when Wendy and I first met, but I can tell you, as can many others, that Wendy has had a huge impact on me as a weaver, and as a friend! Her common sense approach, her willingness to be always learning, her inspirational example to the many students who have had the privilege of her knowledge and guidance whilst she was at the helm at The Handweavers Studio in London (which was saved for future weavers thanks to her and her husband John) is truly cherished, including her commitment to bringing world-class tutors to The Handweavers Studio. Her dedication to solid understanding of weave structures and intelligent application of said understanding leads to beautiful fabrics that are always intriguing and make amazing yardage and even more amazing garments. Wendy is the person who most comes to mind when I am planning something new – I wonder what Wendy would do with this idea/structure/yarn? Here is her story:

What led me to weaving? The quick answer is a fear of somersaults and too many potters! But I suspect Stacey wants me to say a tad more than that, so this is the back story.

When people ask me when I started to weave I usually say 2000, but actually the first time I did any weaving was an evening class when I was sixteen or seventeen. I was at a very academic school and wanted to have one evening a week that was away from books and study but not just going to the local disco. I’d been doing trampolining for a few months but was really scared of turning somersaults, but that was pretty much required if I was going to keep on with it. Evening classes at the local centre looked possible and I decided to try pottery. It was the sixties, pottery and earth mothers were very trendy, but pottery was full. “Why don’t you try handweaving?” the lady said helpfully. “It’s also using your hands.”

And so, not really knowing what to expect, I turned up in a room filled with fairly elderly ladies (well, maybe not so elderly looking back from my current viewpoint), a lot of Harris four shaft table looms, and a really excellent teacher. I so wish I could remember her name; I’ve tried several times since to trace her but always failed. I owe her so much. 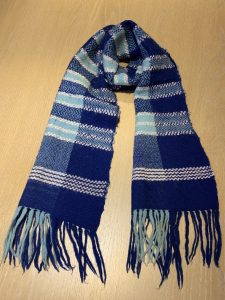 She started off getting me to warp up and weave a scarf as an introduction to some basic four shaft weave structures. Not hip sixties design but not fuddy-duddy either, nice and soft and perfectly wearable. My mother sweetly kept it through the ages, and I came across it a few years ago. After the scarf I decided I wanted to weave the fabric for a skirt. My wonderful teacher didn’t bat an eyelid but seemed to think this was a perfectly reasonable second ever weaving project. She produced a sample card for Shetland wools and I chose three heather-mix colours – purple, pink and grey. I put on enough warp for two skirt lengths and got going. (I should mention that this was the era of hipster miniskirts (aka pelmets), and although the weaving width of the loom was only 15” and I was tall, I used the fabric sideways, so it wasn’t such an impressive weaving task as you might imagine.)

The first length was herringbone twill in purple and pink, and it worked out very well. I wore that skirt a lot over the next few years until maxi skirts became all the rage, and by then it was fairly worn anyway. The second one wasn’t so successful – grey and pink basket weave, perfectly pleasant looking but it didn’t have the right drape for a skirt, never mind one cut sideways, and it bagged a bit at the back – not so much a soggy bottom as a saggy bottom. 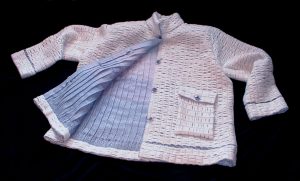 Then exams took over and I couldn’t carve out the time for evening classes in my last year of school. I told myself however that once I was properly grown up and settled with the space to have a big enough loom to weave fabric for clothing at a decent width, I would definitely take it up again.

And then came university and working life and bedsits and shared flats and moving around the country, and before I knew it I was in my late forties, frequently making my own clothes and often frustrated that I couldn’t get the fabric I wanted, but with no more weaving experience. I was as grown up as I was ever going to be, certainly settled, and never likely to have more space than I had then, but would weaving still hold the same interest for me? A two-weekend course at the Handweavers Studio, taught by the legendary Melanie Venes, decided me, and the rest is history.

FOOTNOTE:  Wendy’s personal weaving interests continue to lie primarily in creating clothing fabric, and a major focus of her weaving is the exploitation of structures and fibres to create collapse, pleated or other 3D effects. As though weaving is not exciting enough anyway, she is addicted to the extra adrenalin of seeing what happens when the cloth is off the loom and hits the water!