How I Got Into Weaving – Susie Taylor 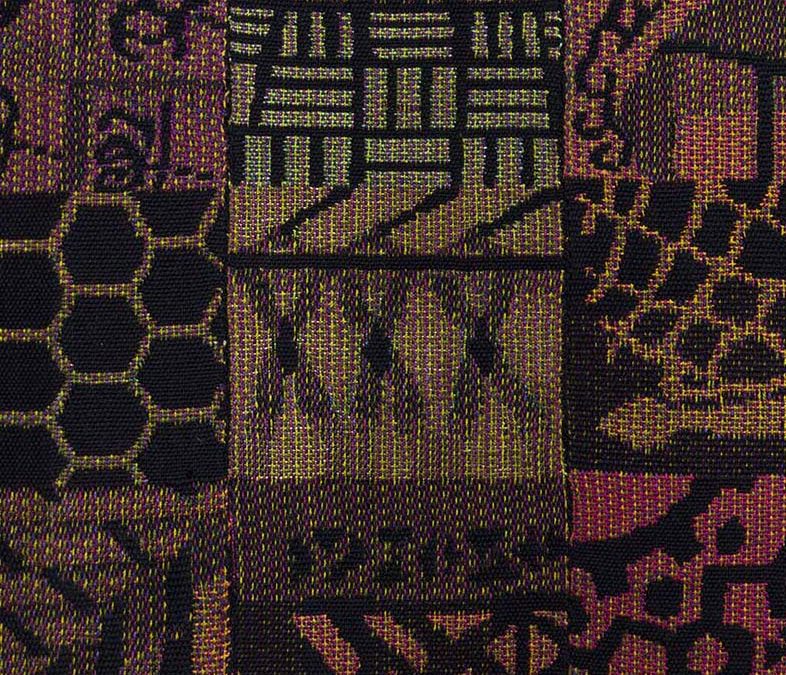 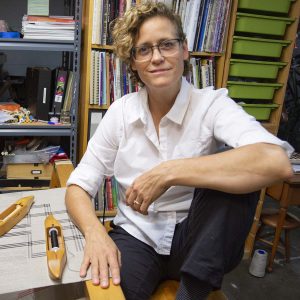 BACKSTORY: Susie exploded onto my radar at Complexity a few years ago with her Weaving Origami pieces that blew so many of us away. It was intriguing – weavers standing around her work, heads on one side, craning forwards and trying to peek behind her work in an effort to try to work out how Susie had created her wonderful pieces. There were a lot of weavers attending to her every word when we had the gallery tour from the artists. But of course, Susie has been on the scene a lot longer than that which will be revealed below in her own words….

Weaving came to me through a general awareness of textiles, Art and tools.  My mother mended and patched our clothing and I often played with her fabric scraps.  Often, I fell asleep to the calming sound of her sewing machine outside my bedroom door.  I was always drawn to Art.  I remember visiting the Denver Art Museum and was inspired by the expansive spaces full of beautiful objects.  My aunt was a high school art teacher in the Seattle area.   Her visits brought a creative energy into our house.  She often showered us with hand-made gifts decorated with batik or silk-screened images.  I was from a large family and we often worked together like a team. There was always something that needed to be built or repaired.  There were tools around and people that knew how to use them and that made an impact on me.  An atmosphere of creative problem solving, combined with an interest to work with my hands are the foundations of my attraction to weaving.

In college I took a class called Fashion Industries, where I first heard the term “textile design”.   I began to feel a pull towards textile design as a course of study and possible career.   One day I stumbled into a classroom with looms and something clicked inside my brain.  It felt like I had found a missing piece to the puzzle of my life.  The loom was such a beautiful tool and I had positive associations with cloth.  As a young adult, weaving was one of the first things to awaken me, like finding religion or a soul mate. 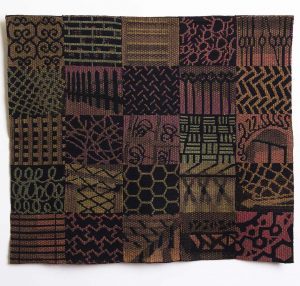 I enrolled at Kansas City Art Institute (BFA ’91 Fiber) specifically to study weaving.  I was drawn to complex structures, especially doubleweave pickup.  I was starting to learn more about jacquard capability but that technology seemed out of my reach as a student.  Now, with some perspective, any floor loom can function like a jacquard loom if the weaver is willing to work at a snail’s pace with lots of hand manipulation.  Roads, (right, 1991 28″ x 30″, cotton) made on an 8-shaft loom, is an example of how I used doubleweave pickup to mimic jacquard structures to achieve different shades blending the two warp systems and two weft systems in different ratios. 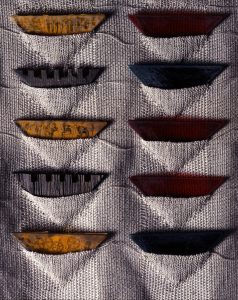 I went straight into a Masters program at UCLA (MFA ’94 Design) where I continued my explorations in hand-manipulated doubleweave.   During this time, I had access to a compu-dobby loom.  Mostly I used this technology to produce multi-layered textiles using simple weaves that were structure driven.  I dabbled a bit with pattern but it’s fair to say that at the time I had very little knowledge or interest in traditional loom -controlled patterns.  My thesis consisted of doubleweave pocket structures (literally) that held objects related to my travels the previous summer. Museum (detail), 1994, 18” x 34”, linen, glass, wood, paper

I transitioned into a technical jacquard design position at an upholstery mill in Pennsylvania and later New York City.  Here I acquired useful problem-solving skills in addition to solid CAD skills.  By day, I designed jacquard fabrics and by night I continued my own investigations in hand-manipulated structures.  First Flaps, (a variation of doubleweave) was my first attempt at weaving discontinuous pleats by modifying my process and loom.  Later, this structure would become the bridge between weaving and origami. 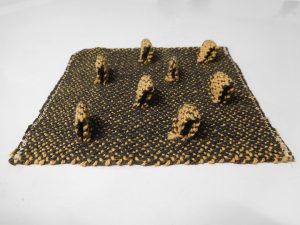 I started a family and shifted my focus away from industry.  To my dismay, my loom was in pieces in the attic and I began to enjoy the portable nature of origami.   Also, I enrolled in a weaving class at Newark Museum to find that I was frustrated by my lack of knowledge of traditional weave structures.  I had skipped over so much leaving gaping holes.  I pursued the Certificate of Excellence, Level 1 in Handweaving as a curriculum to lead me through some of the most foundational structures.  I discovered how rewarding it was to “program” the loom to achieve repeating patterns.  In the end, this experience gave me the tools and confidence to combine loom-controlled structures with hand-manipulation. 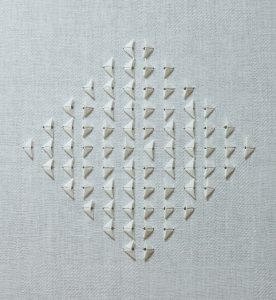 I began to combine weaving and origami (see Big Twill right 2016, 32” x 24”, linen) in addition to drafting block doubleweave designs like Lawn Chair (2018, 23” x 17”, linen below).  Currently, I am a studio artist in San Jose, California.  Weaving is my medium of choice because it is both creative and technical and it allows me to solve visual and structural puzzles.  I often feel like I have had a backwards journey through weaving but I also know that it is not where you start, but where you finish, that is important.   Happy weaving! 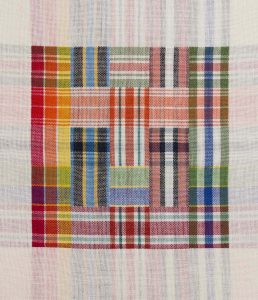