How I Got Into Weaving – Sally Eyring

by StaceyW | Oct 4, 2020 | Art, Education, How I Got Into Weaving, Life, Publications, Teaching, textiles, Weaving | 0 comments 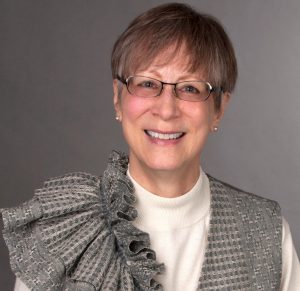 BACKSTORY: Sally Eyring is an inventive weaver – if she wants to do something that no-one else has done (at least that she can find) then she will find a way to do it whether that means learning a new technique (the usual method) or adapting her loom. I met Sally through Complex Weavers and we hit it off as we realised that we are both excited and intrigued by doing things out of the ordinary. I featured Sally in a series on people who inspire me and who are looking at weaving from different perspectives that I did for the Online Guild of Weavers, Spinners & Dyers (UK) a few years ago, as Sally had recently been publishing articles on creating fabric for clothing and shaping it on the loom during the weaving process. Chatting to Sally about her techniques and her MFA, which she earned from the Art Institute of Boston at Lesley University, led to an abiding friendship. She weaves, sews, does glass casting, and is the inventor of techniques that allow weaving three-dimensional forms on a hand loom. She has recently published a book on this – more at the end of the blog post. Here is her story….

As a child, I was a member of a 4-H club. These children’s clubs are wonderful places to learn practical skills like animal husbandry, gardening, baking, and the like. They are similar to Girl Scouts and Boy Scouts, but aimed more at practical home and farm skills. 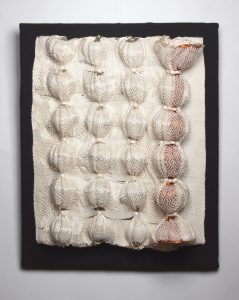 One of the practical skills that we learned was sewing. I have always been very nearsighted. So, when I needed to closely investigate a seam or do hand stitching, I took off my glasses. Without my glasses, I could see the fabric in great detail if I held it close to my face. One day, while looking at a piece of fabric without my glasses I noticed, for the first time, that it was made up of very small threads that ran left to right and up to down. I had discovered weaving! Fascinated by these fine little threads that worked together to create the fabric, I was determined to understand how cloth was made. 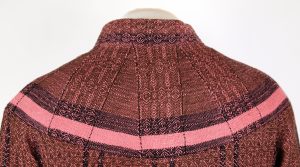 But since this was the early 1960s, I couldn’t just look it up on the internet. One day, I found an advertisement for a small plastic potholder loom. I saved my allowance until I had the required five dollars, sent it off, and soon received my first weaving loom in the mail. Of course, I could only make little square or rectangular pieces and had to sew them together at the edges to make anything larger. But I was hooked!

Many years later, when I was making my own money, I bought my first real four-shaft floor loom. I was shocked to learn that I had to pull each individual thread through a heddle and then through a reed! Doing a warp of several hundred threads seemed like a daunting prospect. I’ve long since gotten over that and now I think nothing of working with warps from several hundred to well over a thousand threads. 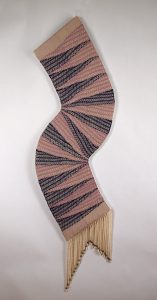 Once I had a floor loom, I found a weaving teacher, took lessons, learned to weave by following the rules of weaving; and I gained experience. But life takes turns and for a time I gave up weaving. I was working in the computer industry and had a job that required a lot of traveling – not very compatible with weaving on a floor loom! At one point, when the computer industry was in a down-turn, my husband and I decided to move for better job prospects. The move required selling our home and buying another. This home, where we currently live, was built in 1908 and it was much in need of renovation. We had contractors do a major renovation on the home, but decided to do the finish work ourselves. For fifteen years we worked on the house, all day Saturday and Sunday, every weekend, from January through May. Home renovation is not compatible with weaving either, and it was exhausting. The rest of the year, we didn’t want to work on anything!

During this time my interest in the arts grew, and eventually became more enticing than the frustrating corporate world. I learned to do glass casting, and specifically, Pâte-de-Verre, and I started weaving again! I eventually gave up the corporate life for the sake of my sanity and went back to school to get a Master’s Degree in Fine Arts, while taking weaving classes on the side.

My turn into 3-D weaving started in an instant, and in the most unexpected way. I was taking a weaving class with a wonderful fiber artist, and one day she said something that almost knocked me off my feet! She simply made a statement of fact, that “when you weave, you always get a rectangle.” That single comment dramatically changed my life and it hasn’t been the same since. 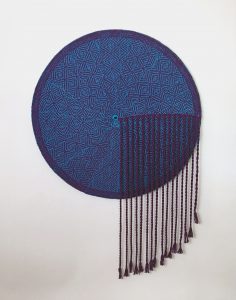 I was a 3-D major, but her comment made me realize that cloth was not dimensional in the way that interested me. Although I loved weaving, it’s primarily a two-dimensional art form. I was interested in working with dimensional shapes and didn’t want to create “just rectangles.” The way I saw it, I had two choices; I could change my major, or I could figure out how to weave cloth in three dimensions.

But, as the saying goes, “if you do things the same way, you get the same results.” I needed to go back to the old “rules” of weaving and determine how to break them if I wanted different results.

At first, I wove with fine wool and used a copper warp or weft to create shapes. Eventually I started working with cotton, linen, and silk, and I started making nonrectangular pieces that I incorporated into clothing. I also had to change the way my loom worked to make it submit to my demands. Eventually I developed three different 3-D techniques and the related tools for weaving dimensional shapes, and now I am sharing my discoveries in a book.

And it all happened because I had bad vision and a teacher who made an innocent comment that set me off in a totally unexpected direction! 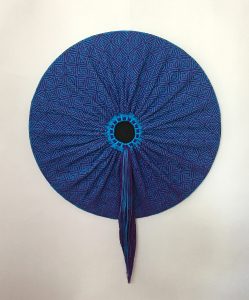 For More Information – these techniques are described in Sally’s new book 3-D Hand Loom Weaving, Sculptural Tools and Techniques, from Schiffer Publishing, 2020. Her work can be seen at sallyeyring.com