How I Got Into Weaving – Lia Cook 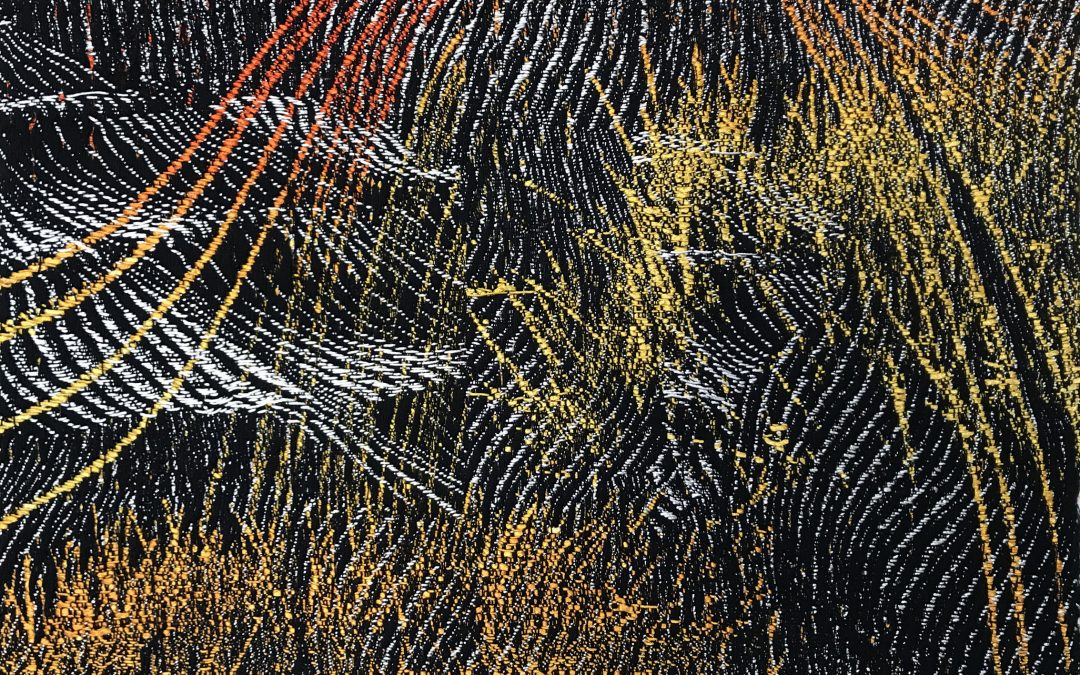 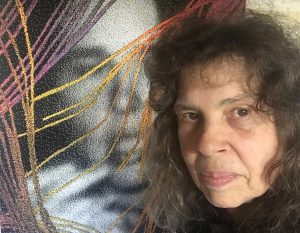 BACKSTORY: Lia’s work has long entranced and engaged me. She is a Bay Area (San Francisco, California, US) visual artist who combines weaving with painting, photography, video, and digital technology to explore the sensuality of the woven image and the embodied memories of touch and cloth. She has been exhibiting nationally and internationally since the 1970s and her work is included in many museum collections.

In 2002 I got the chance to go to the US for the first time, to attend a conference based around an exhibition called Technology as Catalyst: Textile Artists on the Cutting Edge which was on show at The Textile Museum in Washington DC. This was possible due to a Go-And-See Award which the Arts Council England were running at the time. I received a grant and went, not knowing how pivotal that trip would be for me in so many different ways. One of those ways was the introduction to Lia’s amazing jacquard pieces. Literally larger than life, immensely complex and fascinating on various levels, Lia’s work always challenges perceptions. Since then, her ongoing project with brain connections, perception and weaving combining science and art in a complex amalgamation of ideas, weaving expertise and continual questions never ceases to inspire and energise me as a weaver into digging deeper into what weaving means to people perceptually and subconsciously. Enjoy ….

I grew up with a background in textiles, making my own clothes, but the really pivotal experience was a trip I made to Mexico alone on a greyhound bus going from Mexico city to Oaxaca to Chiapas, observing many artisans weaving on floor looms and simple hand looms. I collected many of the woven cloths, garments and brought them home. I decided I needed to learn to weave and spent a year in Sweden studying at Handarbetets Vanner getting an extensive technical education. 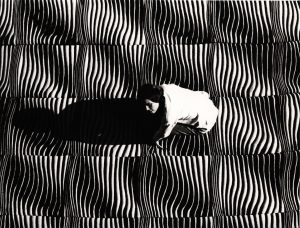 During that year I traveled broadly in Europe seeing the latest of contemporary art, the Venice Biennials, and Documenta, as well as classical art. When I returned home I decided to combine the two: make artwork using weaving as my main material and process. I felt there was a great deal of room for experimentation using weaving as a primary tool for creating “art”.

I returned to Berkeley and studied with Ed Rossbach at UC Berkeley who was a very experimental textile artist drawing on the history of textiles from many cultures combined with contemporary social issues.  My first major international exhibition of work was in the Lausanne Biennial of 1973.

From there my work evolved from parallel line distortion using plain weave, to drapery, cloth as subject manner using dobby patterns with many physical processes, mostly drawing from details of the old master paintings. I then began to focus on the touch of the hand, then body on cloth.

Finally changing to Jacquard on both power and hand looms, the imagery could be controlled by every thread. I had done extensive research into old 19th century Jacquards starting many years earlier but finally was able to own a hand, digitally operated Jacquard loom (TC1).

To explore my interest in the emotional response to a woven image, I worked with neuroscientists to compare woven with non-woven faces. Some of the data obtained from these studies was woven back into my work. During this research process I unexpectedly discovered  the structural fibrous neural  connections within the white matter of the brain, integrating those back into my weaving as well. 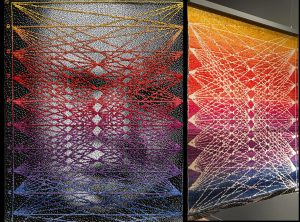 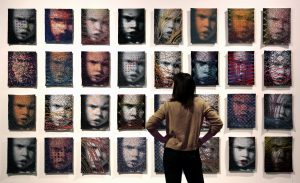 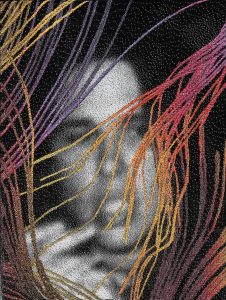 Middle right: Point of Touch Bathshedba   1995 46 x 61 Image of hands touching fabric is drawn from an old master painting. The body becomes visible. Painting on linen canvas, cut into strips and woven into a painted warp. Whole piece is immersed in water and run through a large etching press to compress and flatted the image. Image of hands is  woven on a dobby loom.

Bottom Left: Positivity Su Data  2014   60x 48   Visualization of the data taken from my studies comparing the positivity response to the woven face compared the response to a photographic print of the same image.

Bottom Middle: Su series  2016 32 small woven pieces 16” x 12” each one translated differently through the weaving process. In addition to the strong emotions people have to woven faces, each piece seems to bring out a different emotional response even though the pieces all originate from the exact same image. Not everyone’s response is the same even to the same piece.

Bottom Right: Wonder Net  2017  51 x 39  Image of myself as a young artist with the neural connections from white matter of my brain woven into the artwork

Cover image: Threads Connect Revisioned  2019 19”  x 27”   Neural connections in the brain, combined with plant fibers from the garden and woven together with details from the early black and white optical work.

For more information on Lia’s work, including videos, and upcoming exhibitions, visit  www.liacook.com