How I Got Into Weaving – Laverne Waddington

by StaceyW | May 9, 2021 | Art, Education, How I Got Into Weaving, Life, Publications, Teaching, textiles, Travel, Weaving | 0 comments 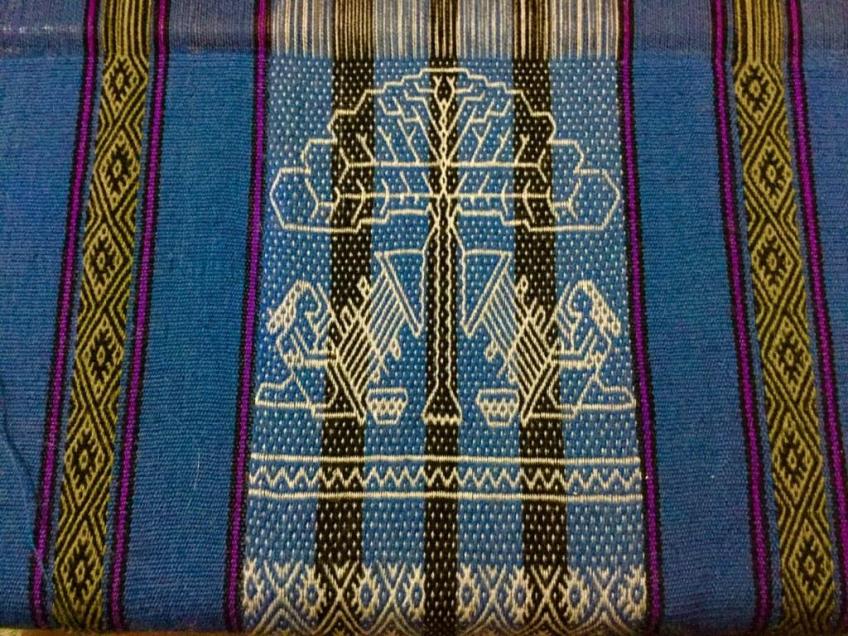 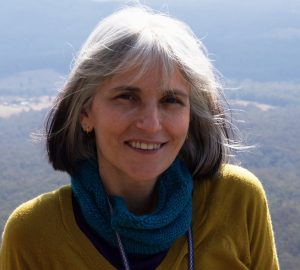 BACKSTORY:  It is through the wonders of the internet that Laverne came into my weaving life. I saw her amazing backstrap weaving online with its incredible detail and painstaking patterning which just sang in my heart and soul. The instant you see her work you know you are looking at the outpouring of love and integrity of a woman whose craft is in her whole body, mind and heart. Laverne’s work is so impressive. Every time she puts up a new post of her work, I am impressed all over again! How many people can you truly say create such an impact? We met in person at the second Braids conference in Manchester (UK) 2012. What a fabulous conference of diverse braidmakers and their amazing and equally diverse collections of braids! Since Laverne’s journey began, she has studied in South and Central America, and with backstrap weavers from Vietnam and Myanmar and shows us just how versatile and expressive backstrap weaving can be. Her story into weaving is a lovely tale of happenstance yet inevitability in some way….. Enjoy!

I often tell people that I fell into weaving. But, even before the ‘fall”, I was dabbling in the dark in attempts to create woven cloth.

In the early 1990’s I was living in southern Chile in a tiny cottage which the owner had decorated with items he had bought in a box of random trinkets and appliances at an auction. I kind of liked the quirky style of mismatched items but one thing that didn’t sit well with me was the bedside table lamp with its yellowed plastic shade. I decided that I would replace it with one that I had woven myself and promptly removed it. 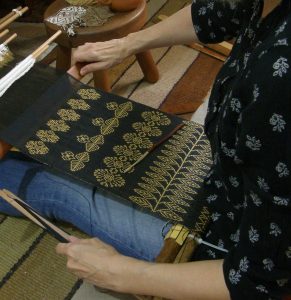 All I knew about weaving at that point came from vague memories of a tiny wooden frame with a metal rigid heddle that I had played with as a seven-year old child. I made a loom by banging together some pieces of scrap wood to make a frame. I hammered nails along two opposing ends of my frame and extended lengths of sewing thread from one end to the other. Acrylic was the first yarn to use as weft that I happened upon in the stores. I created sheds by passing a plastic ruler over and under the warp threads. I thought I was so clever in figuring out that if I did that and then propped the ruler on its side, I could create a nice opening through which I could pass the yarn.

I had no idea about sett. The cloth that I was creating was dense and weft-faced, far too dense to be an effective lamp shade! However, I soon forgot the lamp shade project all together when I discovered that I could introduce different colors of yarn at will and weave pictures! The back of the cloth was a mess with ends of the colored yarn crossing from one place to other. I soon learned how to stop the cloth from being shaped like an hourglass and I wove very small pillow covers and even a wall hanging when I built a much larger frame. My plastic ruler was still my only tool. 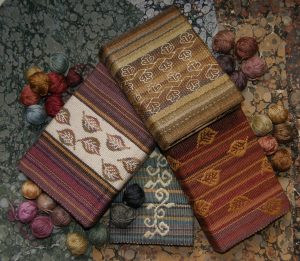 After a trip back to Australia to see family in 1995, I stopped over in the USA to meet up with hiking friends in Colorado to do a series of hikes in the Utah canyons. While staying at a Youth Hostel between hikes, I signed up for a mountain bike trip. That produced the fall that I referred to earlier on. I was on crutches. That was the end of the hiking and I was in no shape to pick up my backpack and move on. One day I hobbled over to the local bookstore and found a book that had the word “Weaving” on its cover. Gold! It was Weaving a Navajo Blanket by Gladys Reichard. With nowhere to go and no one with whom to keep company as all my fellow hostellers were out and about all day, I gobbled up that book. It was in this book that I first learned about the most wonderful thing ever which the author calls the “heald”… string heddles! 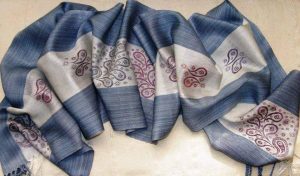 The owner of the Youth Hostel glimpsed the title of the book that I was devouring and suggested she run me over to the museum which just happened to be holding an exhibit of Navajo rugs. It was exciting to recognize the same kind of weft-faced structure that I had been unintentionally creating at home in Chile but even more exciting to see that the back of the Navajo rugs looked exactly the same as the front. How on earth did they avoid creating the mess? The museum staff were unable to help but they did put me in touch with Gladys Miller, a lady from a local weaving guild who had studied with Mae Jim, a renowned Navajo weaver. Gladys took me under her wing and taught me everything she knew about this style of weaving. Later, we went on a road trip to the reservation to visit her teacher’s family. Along the way, we visited trading posts and exhibits and I was sent back to Chile armed with tools, yarn and books. I had a loom built and spent a year happily weaving small Navajo-style rugs. 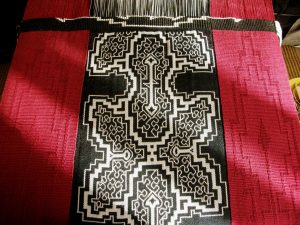 Eventually, it occurred to me that it was quite odd for an Australian to be sitting in southern Chile practicing a North American style of weaving. It was about time I looked into South American weaving. I went to Peru in 1996 in search of a teacher and quickly found one who happened to use a backstrap loom. The rest is history. I returned the following year to work with other teachers and eventually moved to Bolivia in 1998 where I remain and where I have continued to travel and study with indigenous weavers. They have taught me to weave patterns in techniques such as pebble weave, warp-faced double weave and supplementary warp and weft. Now, all my weaving is produced on the humble backstrap loom.

As for that table lamp…well, I am embarrassed to say that five years down the track, I left it sitting there in Chile with its bare light bulb!

Website for my eight books and video class:  http://www.taprootvideo.com/instructorClasses.jsf?iid=3