How I Got Into Weaving – Laura Fry

by StaceyW | Aug 10, 2020 | Education, How I Got Into Weaving, Life, Publications, Teaching, textiles, Travel, Weaving | 0 comments

BACKSTORY: I first met Laura in person whilst I was living in Tean in the UK – I can’t remember the year now – but she came with weaver Kerstin Fröberg whilst they were travelling around the UK. What an honour. Whilst I hadn’t met her in person before, I certainly knew about Laura – her mantra of ‘a fabric not’s finished until it’s wet-finished’ and her publication of ‘Magic in the Water’ with its physical samples of fabrics before and after wet-finishing, was a staple for many a developing weaver, and her study of ergonomics in relation to production weaving and her advice to prospective production weavers was down-to-earth and honest. It’s incredible to think that Laura was a professional production weaver for four decades, although she has now ‘retired’ and is weaving for her own enjoyment.  Here’s her story….

My journey to the loom was a long and convoluted one.  Since I ‘retired’ – so to speak – at the end of last year, there has been plenty of time to reflect on the 4 plus decades of living as a professional weaver in these times when ‘weaver’ is no longer considered a profession.

When I finally stopped to consider weaving as a potential career, I had actually never woven on a floor loom.  I had had a childhood of working in the textile arts and an appreciation of good cloth. What I knew about weaving – the actual craft – could be written on a small Post-it note!

However, I was looking for something to do with my life that included creativity and autonomy.  If it also included textiles? That sounded like something that would hold my interest for a lot longer than any of the jobs I had held up to that point in my life.

What I anticipated was that I would production weave for 25 years, then teach for 25 years.  In the end, it was soon apparent that making and selling textiles would not bring in enough income on its own, and requests to teach began coming to me almost immediately.  So I wound up weaving and teaching and writing about weaving all at once. 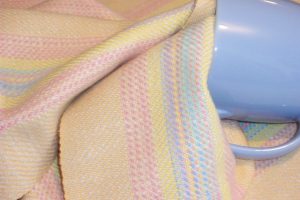 I chose to tackle the Guild of Canadian Weavers master weaver program.  Since I didn’t have a degree in textiles – or teaching – I felt the master certificate from the GCW would at least let people know I had studied the craft and might know a few things. I also worked hard to learn how to weave ergonomically, partly because working ergonomically means minimizing damage to the body, but also means becoming more efficient.

People began asking me to write a book on a topic that I had researched deeply so then I had to learn how to self-publish and market a niche topic to a niche market.  After swearing I would never do that again, I did a second one. 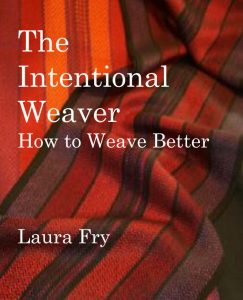 In the end, as I look back at my life I can say with certainty that choosing weaving absolutely gave me everything I asked of it.  And more.

As for the future, I am in the process of weaving down my stash. I am hoping to find a topic that appeals to me to take a deep dive into, but I’m in no hurry.  I have a lot more yarn to use up before I need to worry about something else to explore.

Laura still writes for publication and has self-published two books available on http://blurb.com. She enjoys sharing her journey through her blog http://laurasloom.blogspot.com and more recently on http://ko-fi.com/laurafry