How I Got Into Weaving – Katharina Krönig 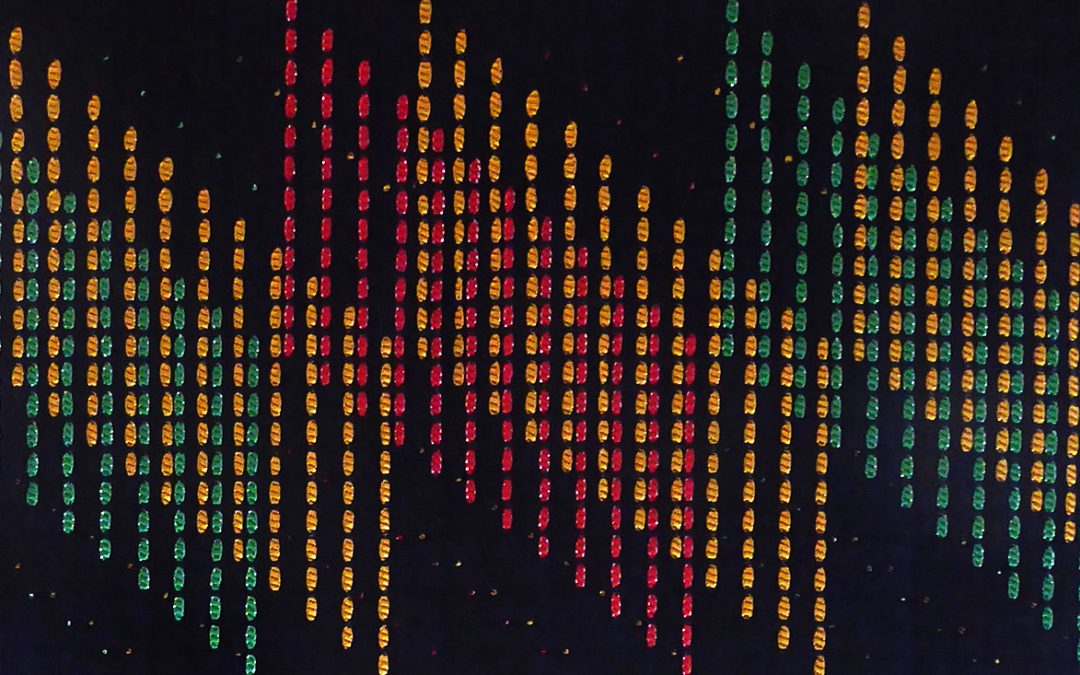 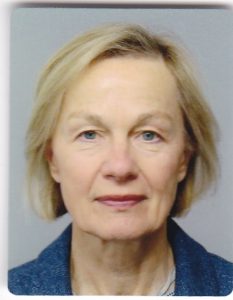 BACKSTORY:  I have known Katharina for a few years – we both attended the same workshop run by Bonnie Inouye – but our relationship has developed quite recently. I am working on a project involving optical illusions which have fascinated me for years and I decided I wanted to devote some serious study into whether they would translate well into weaving and what effects would work best as woven fabric. I put out a blog post and social media call-outs for interested people to contact me and got a wonderful response. Katharina has been working on woven optical illusions for some years and included some in her professional work as weave designer. We started chatting and realised we have wonderfully diverse approaches but similar goals and aspirations in our weaving and our friendship has grown. I am delighted that she has agreed to share her weaving story!

HOW I GOT INTO WEAVING :

A little girl is sitting opposite a woman. The woman, in her fifties, has a kind, wrinkly face; grey hair in a tidy bun. They chat while a brightly coloured ball of wool dances on the floor between them. The girl watches with fascination how the knitting needles in the woman’s big worn hands steadily eat up the ball of yarn. It does not take long until the ball is transformed into a dress for the girl’s doll. The girl is delighted, thrilled equally with the dress as with the transformation of a simple ball of wool into an object. The woman is the much loved nanny/housekeeper to the girl’s mother; and she is much more. Essentially, it is she with her knitting needles who lays the first stone to the girl’s life in textiles. Those first impressions of how yarn changes into something desirable and delightful will never be forgotten. Some years later the girl’s parents commission a heavy curtain to be made as a room divider for their modern new house. The heavy curtain, monochrome, double sided with an abstract pattern, fascinates the girl. Another stone is laid. 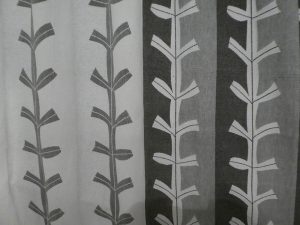 The third stone is laid by the girl’s mother who shows her how to sew her own clothes on a Singer sewing machine.

Fast forward through youth, university, relocation from Berlin to the UK, via work in hotel design, followed by redundancy due to the recession of the early 90s. The girl, now grown up and married, is developing a small knitting business, first designing and making jackets, then throws and blankets, some art pieces. She becomes a member of various arts groups, the Society of Designer/Craftsmen among others, takes part in group exhibitions and craft shows in the UK and Germany. On one of the craft fairs in Germany her stand neighbour is a young weaver who demonstrates weaving on an 8 shaft loom. Something about the fabric, its tautness on the loom, the subtle interaction of colours, the physical act of weaving, speaks to her so strongly that, once back in the UK, she sets about finding out about weaving. She joins a group of weavers who run a workshop at a local college. They teach her the first steps in weaving. Soon a four shaft Glimakra floor loom joins the knitting equipment in the studio. Her first piece, a rug in shades of red and orange, comes off the loom. 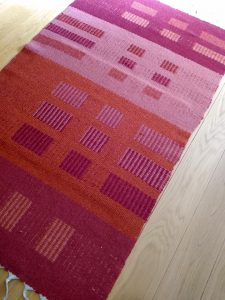 She now knows that this is what she wants to do for the rest of her life.

Reader, this is how I became a weaver!

I now weave on a multi shaft dobby loom. Having repeatedly shown my sample work at Heimtextil/Frankfurt , I have worked for international weaving companies, having scaled down the business to free up time for travel and art some four years ago.

Translating ideas into woven structures, be it for fabrics or art pieces, offers endless and fascinating possibilities. Bringing all the variables together – design, structure, colour, yarn –  in the unique way only weaving provides, turned out to be a most wonderful (and addictive) challenge. Now there is another exciting challenge – Stacey has kindly invited me to join her on her new project on Woven Optical Illusions.

Reader, this is how I have stayed a weaver… 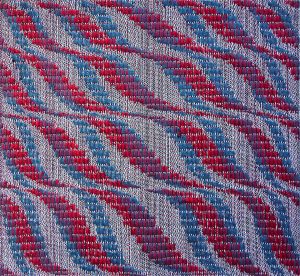