How I Got Into Weaving – Jennifer Moore 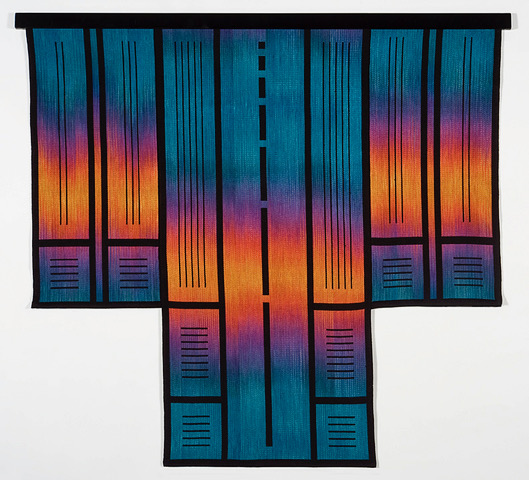 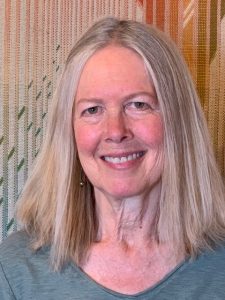 BACKSTORY:  Back in 2010, Handweavers Guild of America‘s biennial conference, Convergence, was held in Albuquerque, New Mexico. I had the pleasure of giving two presentations there and also of being the juror for the yardage competition, which is not for the faint-hearted! But one of the highlights of the experience of being in Albuquerque for me was meeting and seeing for the first time in close quarters the incredible doublecloth wall hangings of Jennifer Moore. She truly is a master of double cloth, complex colour arrangements, mathematical patterns and musical structures (an immediate connection for me!). She was a ‘local lass’ as she lives in Santa Fe although she travels extensively to teach workshops in doubleweave, color and geometric design including to indigenous Quechua weavers in Peru in 2013, where they are once again excelling in this technique which had been discontinued after the Spanish conquest. She has an MFA in Fibers and is the author of The Weaver’s Studio: Doubleweave, several doubleweave videos and online courses, numerous articles and unsurprisingly has won many awards for her work. Here’s her story:

In 1977 I was in my last year at university, finishing up a double major in art and biology and a minor in pipe organ performance. The plan was that I would eventually go on to medical school and become a medical illustrator. 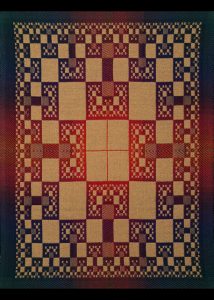 At that time my artwork focused on drawing, printmaking, calligraphy and bookbinding – very meticulous and realistic work that was primarily done in black and white media. But I also wanted to round out my experience by taking a class in every medium that was offered. I took courses in painting, ceramics and sculpture, and then signed up for a weaving class, just because there was one – I really had no idea what weaving actually involved.

As soon as I walked into the weaving studio and saw the looms and shelves full of colored yarn I just got a feeling of having found my home. When I was introduced to weaving drafts the threading patterns reminded me of musical notation and the first time I sat down at a floor loom it felt like playing the pipe organ, except that the results came out in color instead of sound. Instead of the required two projects for the class I wove six projects over the ten-week term. By the end I felt comfortable dressing a loom on my own and I knew this was something that I wanted to continue doing. I never did go on to medical school and I have been weaving ever since.

Over the next dozen years I lived in a variety of states and countries and worked in a variety of jobs. But no matter where I was I found a way to pursue weaving, taking classes where I could, and borrowing looms whenever I could. In the process I unravelled the mysteries of doubleweave, and it has been my chosen path for creative expression since that time.

In the early 1990’s I returned to graduate school at the University of Oregon to pursue a Master of Fine Arts in Weaving. Given that it was a one-faculty department I don’t think that I could have chosen any better. Barbara Setsu Pickett was an incredible source of support, inspiration and encouragement, and we got excited about many of the same ideas. We became lifelong friends and have traveled throughout the world on various textile adventures together.

For my thesis work I decided to explore relationships between weaving and music through their underlying mathematical structures. This led me into studying the golden proportion, Fibonacci sequence, symmetry patterns, tessellations and fractals, concepts which I continue to explore in my woven designs. 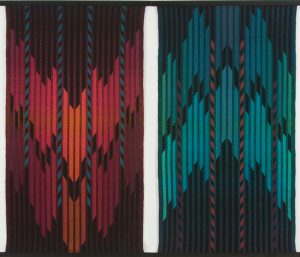 For the past thirty years I have been teaching doubleweave, color, and geometric design in workshops around the U.S. and abroad, and now online as well. Most of my personal weaving these days is motivated by wanting to try something that might be of interest in my classes. One of the very rewarding aspects of teaching is when students take something that I have taught into a new direction that I hadn’t even considered. I am constantly learning from and being amazed by what my students do.

While my life has taken many twists and turns over the years, the thread that has tied it all together has been weaving. I feel very fortunate to have found this path at a relatively young age and that weavers have been a tribe of people that I have gotten to spend a lot of my life with.

Images: Main: Awakening; From Top: Parquet Permutations I; Introspection; We All Look Up At the Same Moon; Rhapsody in Red & Blue II & III.