How I Got Into Weaving – Janet Phillips 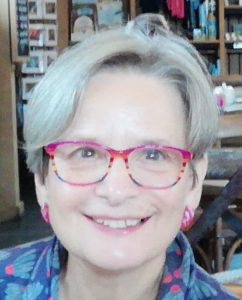 BACKSTORY:  Janet was another weaver who was always there when I first started weaving and who has stood the test of time. Her first book The Weaver’s Book of Fabric Design (1983), (her second, Designing Woven Fabrics, was published in 2008) was alongside Mary Black’s The Key to Weaving, Halsey & Youngmark’s Foundations of Weaving, and Marianne Straub’s book Hand Weaving and Cloth Design. All of these books were much used and poured over and little did I think at the time that I would get to meet and interview Janet later on. She actually bought a table loom from me when I was moving up to a larger loom which was the first time I met her in person. A few years ago we spent a little time together in Somerset whilst attending a conference in Bath and she kindly invited me to stay as she knew I was interested in geology, something I share with her husband, and we took a fabulous stroll along the coast admiring the alabaster and the strata which led to a piece of art that I created during my masters study. It was fascinating to read Janet’s introduction to the world of weaving…..

I often think how lucky I was to find weaving at the young age of 17. It came about by chance really, and the fact that I attended six different schools in the 12 years of my formal education. 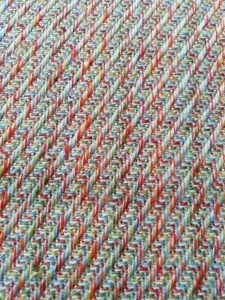 I was born in London in 1951 but moved to Worthing in Sussex at the age of two and lived there until the age of 7. I now know that I was a self-contained, deeply shy, introverted girly girl. Of course I didn’t know this at the time, but they are still my fundamental characteristics. I was very fussy about what I wore. It had to be pretty dresses. My favourite dress was yellow with brightly coloured umbrellas printed on it. It had a large sailor collar. 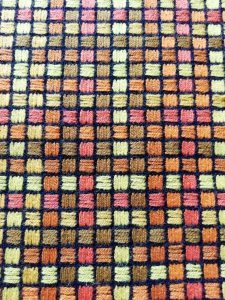 At the age of 7, I moved to Edinburgh. It was here that I attended three different schools, each time finding myself the new girl amongst cliques of children. I was always the odd girl out. In many respects this did not bother me particularly, I just played by myself in my own world. I played dolls, dressing-up. I loved solving puzzles and wrote my own puzzle books. I started collecting ribbons and beautiful fabrics.

My first senior school was George Watson’s Ladies College in Edinburgh. At the age of 14, I move to Glasgow and did my O level examinations at Queens Park Grammar. My strong subjects were maths, history and art. While in Glasgow I attended Saturday morning classes in the beautiful Charles Rennie Macintosh art school. The detailed design features within the interior of that magnificent building have always stayed with me.

Then at the age of 16 in 1967, we moved back to Edinburgh. I refused to return to George Watson’s, so my parents bought a house outside the city boundary so that I could attend the state school, Currie High. I was the 13th girl in my year. The other 12 girls had all attended this school since the age of 11. 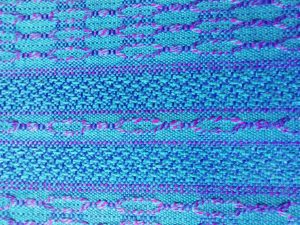 During the summer holidays of 1967, my grand parents from London came to stay. One day we all went out. We could have gone anywhere that day, but for some reason my parents took us to Galashiels, a textile town about 30 miles south of Edinburgh. We spent the day visiting mills. One was the mill of Bernat Klein who was revolutionising the Scottish Tweed industry by weaving fabrics in exotic colours and yarns. I can still see myself in that mill that day, feeling so excited by the colours and fabrics, and the idea forming in my mind that one could earn a living doing this.

Back at the new school it was head down working to pass my Higher exams. It was at Currie High that I realised I preferred art design projects rather than actually painting pictures. My exam results were ok, but because I didn’t really know what I wanted to do it was decided that I should return to school for a second year and sit yet more Higher exams.

The first day back for this second year found me alone at break time. The 12 other girls had all been made prefects and were spending the break in the prefect’s room. 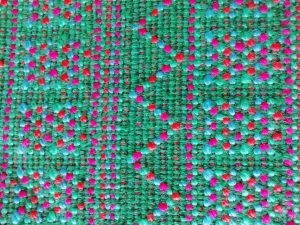 My Dad was up at the headmaster’s office the next day. It was decided that I would be allowed into the prefect’s room at break time, but I would not be made a prefect. It was also clear that the school had nothing to offer me. I had enough Higher exam qualifications. I just had to decide what I wanted to do. I spent the next two days in the library wading through prospectuses. On the second day I came across the Scottish College of Textiles in Galashiels, and saw myself in Bernat Klein’s mill. A week later I had an interview and three weeks after that I started a four year course in industrial textile design. I loved it from day one. The loom I was given that day was a 24-shaft Dobby.

The other great thing was that for the first time I was not the new girl.

What I love about weaving is the combination of colour, rhythm, repetition and maths. I still find it fascinating to this day. Weaving has also enabled me to continue to play in my own world.

I often think that if I had been made a prefect I might never have found weaving as a career. And of course it was also that random day trip to Galashiels.