How I Got Into Weaving – Cally Booker 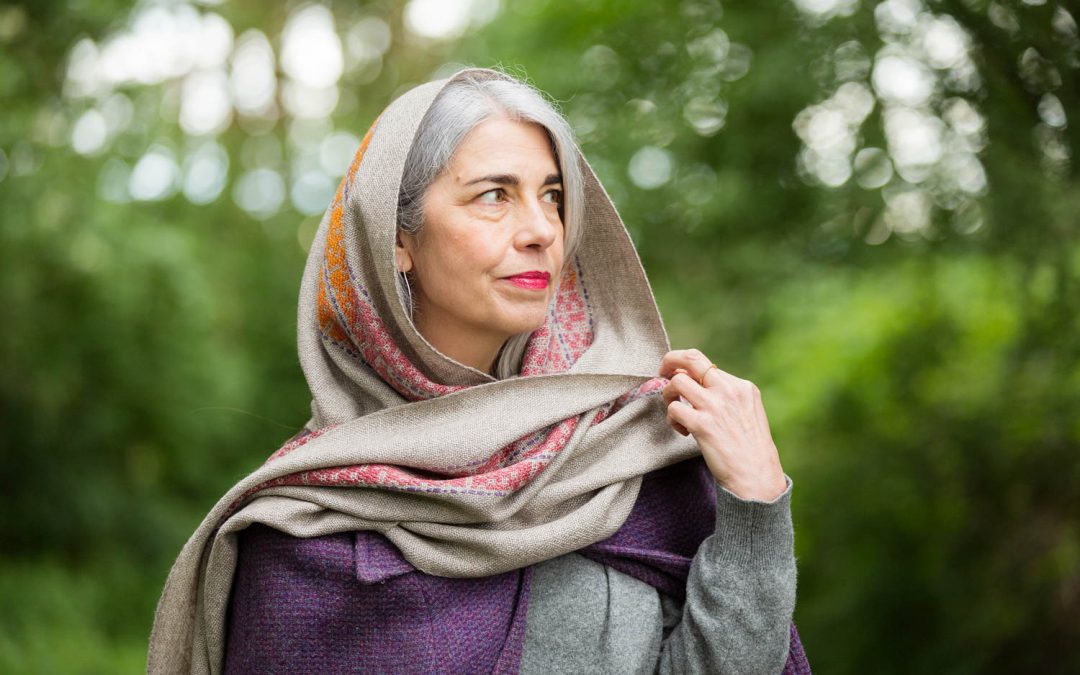 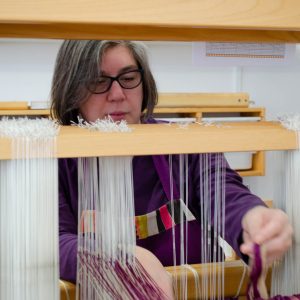 BACKSTORY:  Cally Booker is based in Dundee on the east coast of Scotland. It is some years ago now that we first met and we share the history of both undertaking the Bradford Diploma of Handloom Weaving, albeit at different times. A past President of Complex Weavers, and a current member of the Society of Designer Craftsmen in the UK, Cally has exhibited her work nationally and internationally and become known for her colourful weaving style and lively enthusiasm for the structure of woven cloth. Through her Warp Space blog she offers resources to help novice and intermediate weavers develop creative confidence at the loom. She draws inspiration from her environment in many ways, seeking out patterns and rhythms as well as unusual sources of data to incorporate into weave. Since 2018 she has been a participant in the Aural Textiles project, uncovering ways of using the sounds of the Scottish landscape as the basis for textile practice. Here is her story…

I didn’t want to learn to weave.

It was November 2003 and my mother had quite recently retired. After several years overseas with her job, she had settled just a few miles down the road from me. Mum had taught me to knit and sew when I was a child, and we always enjoyed doing craft activities together. No sooner had she arrived in Dundee than she was signing me up for weekend workshops!

I had already found myself learning to spin, when our local yarn store offered a one-day taster class in weaving. My mother wanted to go but she couldn’t make the date, and exercised her parental prerogative with the fateful words, “You can go instead, and then show me how to do it.” I grumbled that I was busy with the spinning, thank you, and didn’t need any more hobbies, but what can you do?

So I went mumbling and muttering off to the yarn store, and came back that evening with a second-hand table loom in the back of the car. 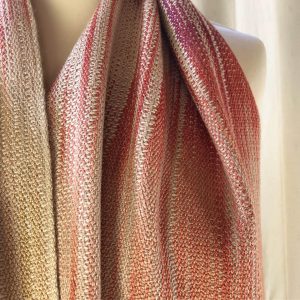 What was it about weaving that caught me so completely in a single day?

We went through all the steps of setting up a loom, and the contrast between the simplicity of each individual process and the complexity of the overall result seemed like a kind of magic. But it was better than magic, because it was the ingenuity of all the weaving minds that have gone before us and who devised the tools and the processes we use today.

Getting started was one thing, but progressing was another. At the time, there were limited local options for learning more about weaving, and I quickly exhausted them. In 2004 the Crafts Council hosted a retrospective of Ann Sutton’s work, which came on tour to Scotland. It was fascinating and inspiring, but also made me acutely aware of the gulf between my knowledge and my weaving ambitions.

I wanted to push myself forward, so in 2005 I joined the part-time Handwoven Textile Design course at Bradford College, and it promptly all went wrong! 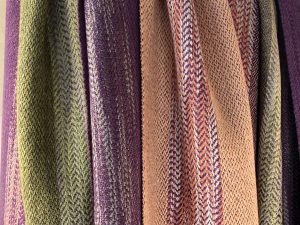 The course was quite a stretch for me as a relatively inexperienced weaver, so it felt like a serious blow when I became ill during the first few days and ended up in Bradford Royal Infirmary instead of the college. It left me feeling that I would never catch up, but I was determined to get as much from the course as I could.

The course was structured into projects, and for each project we had to produce a portfolio of samples. There were no finished pieces at all in the first year. This was a real mindset-shift for me. Well-meaning friends often ask, “What are you making?” or “What’s it for?” and it sets up an expectation that weaving needs a practical application to be purposeful. But weaving to improve your understanding of weaving is a perfectly good purpose in itself, and as a bonus you get a library of swatches to mark your progress and keep as a reference.

The two years of ‘the Bradford course’ were incredibly stressful and challenging, but the sheer pressure of deadlines moved my weaving on by leaps and bounds in a way that I would not have managed by myself. 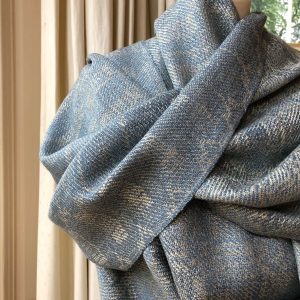 These days there are many more resources available to new weavers, especially online, but I have never forgotten the loneliness of working things out on my own. It is one of the things that motivates me most in my teaching, my blogging, and in the online course materials I am developing. I aim to dig deeply into the relationship between the draft, the weaving process and the cloth, unpicking the assumptions that, as experienced weavers, we often don’t even notice that we are making.

I love these processes and am in awe of the minds that devised them, enabling me to come to my loom in the 21st century and have so much potential at my fingertips. I don’t remember what my mother was doing that Saturday in November 2003, but I’m glad she was double-booked!