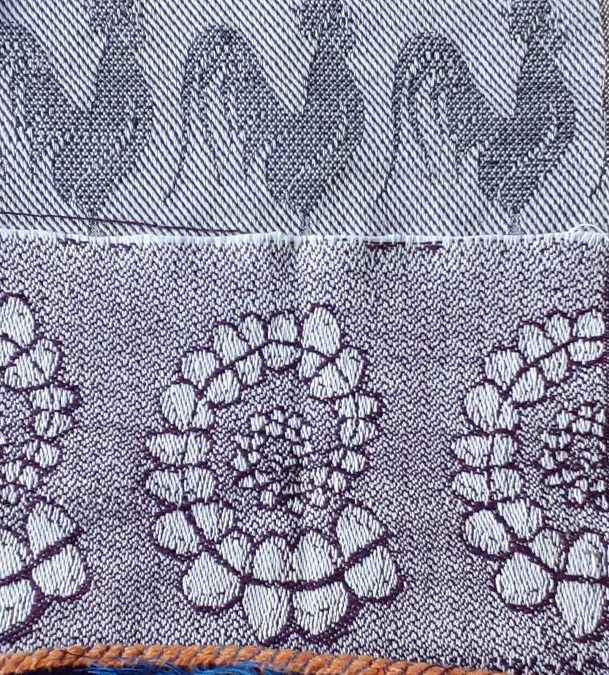 I’m sure we have all had what seemed to us unrealistic dreams – those ‘perhaps one day, if everything works out’ or ‘if I ever inherit some money, this is what I would do with it’ types of dreams. Well, sometimes things do just work out and in completely unexpected ways!!

It’s taken a while…. 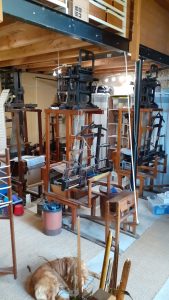 In 2002 I went to the US for the first time to see an amazing exhibition at the Textile Museum, Washington DC,  called Technology as Catalyst: Textile Artists on the Cutting Edge, featuring such luminaries in the textile art world as Lia Cook, Susan Brandeis, Junco Sato Pollack, Cynthia Schira, Hitoshi Ujiie and Carol Westfall. Not that I knew about any of them at that time. This was my first encounter with digital jacquard weaving and printing and it blew my mind! Two years later by a strange twist of fate, I found myself with a 1930’s industrial jacquard loom – all 2.5 tons of her –  which came into my life in an unexpected and disruptive way. Some of you may have read in the the Journal of Weavers, Spinners & Dyers issues 211 & 212 (Sept & Dec 2004) or the Complex Weavers Journal Issue 79 (Oct 2005) about the story behind Hattie’s arrival and my subsequent adventure at the Lisio Foundation in Firenze (Italy), learning how to use and design for her.

Writing about those experiences led to the chance to acquire four (yes, four!!!) sample jacquard looms from the 1880s that had been at Leeds University as the teaching tools for up-and-coming textile designers. They had served the university and the textile industry well but after all those years the march of progress meant that they were no longer needed, having been usurped by digital technology, and they were needing a new home. These wonderful card-looms still work and continue to teach me and my students about how designs work in various repeat sizes as they are all different, running from a 1 1/2-repeat to a 5-repeat loom (see two of the repeat structures in the feature image).

These looms require a lot of work, cutting and lacing cards using traditional methods by hand. However, as seen at Technology as Catalyst, there was also another way – digital technology captured in a handloom called the TC-1, the brain child conceived and developed by Vibeke Vestby and brought into life by Tronrud Engineering in Norway. This was a breakthrough and with weavers such as Lia, Cynthia, Carol and others, it opened up possibilities only previously achievable through patience on old card-driven jacquard looms or large industrial jacquard looms which are not generally a financially feasible method for art weavers who want to create original and one-off pieces.

Meeting Vibeke and Lia in person was the start of a dream to own my own digital hand jacquard loom, but there was a slight problem – the price! This is not a cheap option!! And I have waited since then for the opportunity to be able to acquire one. The TC-1 has since been superceded by the TC-2 but I am just so delighted to be able to add a TC-1 to my rather extensive loom collection!! She arrived last week and, thanks to the patient and persistent Alan Willey at Handweavers Studio in London, she is working once more!!!!!!! To say I am thrilled is an understatement! I don’t think Alan would have needed the internet connection to hear my cheer and loud celebrations when we managed to fire her up, and everything worked!

Ada dates from 2006, which means she’s quite old in digital terms. She has two back beams, which means I can do my differential shrinkage projects on her. She has 10 modules, which means that I can use 8 (there are two vacuum boxes with 4 outlets each) with 2 modules to spare. She has a dental compressor which we have housed in the cave area next to my studio, and all I have to do now is to make my first warp of 1320 ends at 90 epi and revise how to design and weave on a TC-1 which I last did a long time ago. 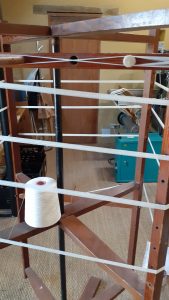 Those of you who know the history of the jacquard loom will no doubt recognise that Ada’s name is inspired by Ada Lovelace (Lord Byron’s daughter) who was an amazing mathematician of her day and her observance of seeing a card-driven jacquard loom in action, realising that this would create the basis of a system of calculator that her friend and inventor Charles Babbage was working on. His Analytical Engine and his Difference Engine led to the birth of the modern computer. It seems only right that she takes her place in my studio alongside those very same card-driven jacquard looms that were her inspiration.

So a lot of learning and relearning is about to commence. No doubt there will be some blue words from time to time whilst my brain cranks back into gear, but it just goes to prove that if you hold on to your dreams through thick and thin, sometimes they come true!!!!!

Welcome to Ada and our new life together!!

Images: Feature: two of the the four different repeat systems on my card-driven jacquard looms. Designed by (top down): Christine Jeryan; Marie Carmel.  Main from top: my 4 ‘baby’ jacquard looms and dog Bailey; Ada; the first half inch of Ada’s new warp!