Hidden Tapestry: Jan Yoors-His Two Wives-And the War That Made Them One       Debra Dean

This book details the incredible story of Flemish American artist (and World War II Resistance fighter) Jan Yoors whose artistic vision was realised through large tapestries woven by his co-habiting wives and through his photographs of Manhattan.  Not only is this a fascinating biography of an artist finding his voice through the demanding medium of tapestry, but it is a real-life Boys’ Own adventure story of a young man’s travels with Gypsies and undercover work with the French resistance, although he himself was captured and tortured by the Gestapo.

As if this wasn’t adventure enough, Yoors managed to persuade his wife and childhood friend, Annabert van Wettum, to accept her friend (and his model) Marianne Citroen as his mistress, with Marianne joining their household on Jan and Annabert’s 1st wedding anniversary, forming a poly-amorous family that lasted for the rest of their lives.

In the spring of 1947, the Victoria and Albert Museum put on an exhibition called “Masterpieces of French Tapestry” and watching a master weaver from Aubusson at work caught Yoors’ imagination and prompted the designs of large scale tapestries which Yoors, Annabert and Marianne wove.  This incredible partnership executed all the tapestries that Yoors became known for, despite being self-taught and not having had much previous practice before undertaking the first commission pieces.  In fact, by August 1948 the two women were weaving constantly for his first major exhibition in London at the Archer Gallery.

Later moving to New York, the trio began making tapestries on a large scale, using old methods but with Yoors’ modern designs of big colour fields and a limited palette of bright jewel tones that reverberated against each other, using two contrasting or complementary colours to make an area appear three-dimensional.

The book gives a fascinating glimpse into a highly unusual family unit amongst the New York bohemians of the 1950s and 60s, including the addition of two other models into the family group whilst all the time creating an impressive body of large woven tapestries.

“Hidden Tapestry” is so much more than an interesting biography.  It is written in a rough timeline sequence and delves deeply into the different facets of the three main characters, exploring Jan Yoors’ relationship with the Roma; the war years of all three main characters; the difficulties of living in their chosen way; the precariousness of earning a living as practising tapestry weavers in post-war New York; and their continuing lives together.  Whilst at times I felt a little confused about certain links or timings, and I was decidedly disappointed with the editorial oversight of ‘dying’ for ‘dyeing’, I thoroughly enjoyed the book. Debra Dean has teased apart the various strands of the Yoors family life, documenting and re-assembling them with an engaging, informative and compassionate approach.

Other books in the pipeline for reviewing: 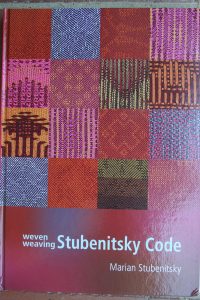 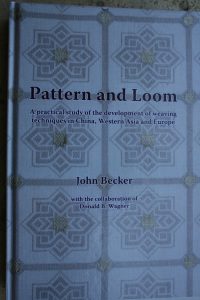 These might take a while as, in order to review properly, I need to work through the books and both look to be absorbing studies!  In the meantime, Happy Weaving!